I have been invited by Terry of Through the Lens of My Life to participate in a Five Day Challenge.  Each day, I will post a photo and write a story to go along with it.  (I probably will interpret the term ‘story’ quite loosely.  I do that.)  I will also invite one person each day to take up this challenge on his/her blog. 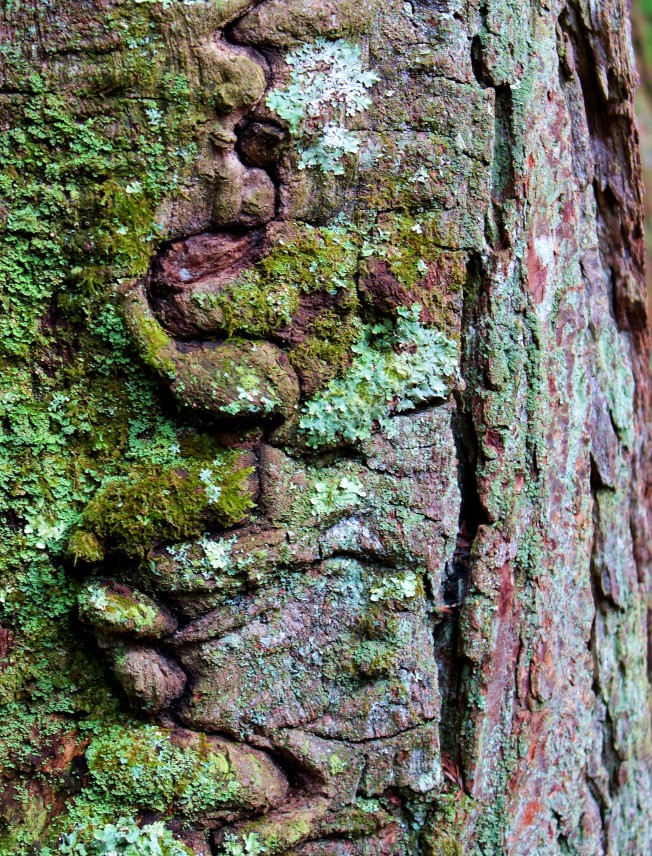 The cold air pricked her cheeks as she walked the soggy trail. The sting kept her alert in her solitude, her daydreams suppressed by the chill of Now. Her downcast eyes were wary, marking her footing lest she slip on an icy patch in her resolution to maintain a brisk pace. On either side of her, oaks and pines stretched darkly upward into a damp, gray sky. The leaf litter beneath her feet offered up the rich, earthy smell of decay. She breathed it in deeply and raised her head. At the fork in the path loomed a large, lichen-covered trunk. At eye level, the bark was stripped away and a curious zigzag was laid bare. Suddenly, her legs grew weak. She stood still, staring at the jagged gash. Tentatively, she raised her hand and pressed her fingers into the seam. The place felt warm to her touch. Slowly, she traced the serpentine line, caressing each inch with intent awareness. Her brows pinched together, and her nose stung. Her salty tears ate away the iciness of her cheeks. This living tree displayed the image of her memories, the shiny white scar down his breastbone, wider and redder in a few places where the staples had given way and the flesh had became infected, punctuated here and there with the small holes of needle entry. How often she had looked anxiously on those scars. How guilty she had felt when she at last laid her head on his chest again and noticed the swelling when she raised it precious minutes later. The last thing on earth that she wanted was to add to his pain. His quick laugh was enough to assure her that he wanted her closeness more than her worries.  And with that memory, she recalled the tender touch, re-enacted it, and reverenced the miracle of healing in the patient example of the living pine. The tree stood tall bearing witness to its tale, and she moved on, alone, bearing hers.

— Next, I invite you to visit Edward Roads at My Two Sentences.  Each of his posts is exactly that, two sentences, narrating an idea inspired by his photos.  His genre makes my brain whir, filling in more detail to the story, and his vocabulary makes me get out my dictionary – which I appreciate!  I reckon his two sentences amount to a story, so he’s already completed this challenge and will probably keep it up for at least five more days.  (So, no pressure, Edward! 🙂 )