We have been experiencing some very unusual weather for January here in Wisconsin.  We have no snow, and it’s 50 degrees Fahrenheit.  Now, we often get what I call a “January thaw”, but this year, it’s been all thaw and no freeze.  I worry about the polar bears further north trying to adjust to these conditions.  And while I’m sure that climate changes are part of the natural process, I can’t imagine that 7 billion people aren’t having an impact on this.

I did another training day at the Nature Center.  We were learning about winter tracking.  Well, there isn’t any snow to see tracks in.  But there’s mud and other evidence that critters are alive and well, even in winter.  I like the fact that Wehr Nature Preserve is a “passive recreation” area.  That means that we don’t allow jogging, biking, skiing, snowmobiling, or pets on the trails.  There are plenty of other places for that.   Believe it or not, though, my most exciting animal encounter yesterday happened at dusk at a city park, right near a noisy train track and a major through road.  In the stream by the sidewalk, this muskrat was heading toward his home with a bit of a root in his mouth.

I snapped this picture as he headed under the footbridge where I was standing.  On the other side, he swam about 8 more feet away and then disappeared under the water with a flip of his tail.  The underwater entrance to his burrow must have been nearby.  I was so excited to see him with his vertical tail rudder, just skimming happily through the stream!

And then, the sky….I couldn’t stop taking pictures. 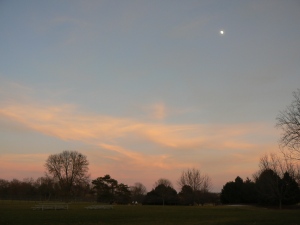 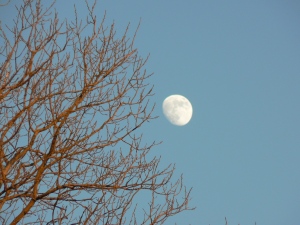 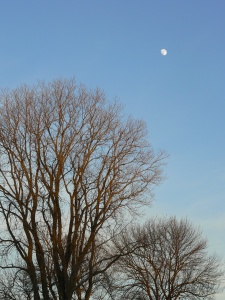 On a night like last night, I could well imagine setting off on a camel to follow yonder light just because its luminescence compelled me.  It invites me to slow down and enter a silent world, removed, far off.   The traditions of the ancient festivals of Twelfth Night and Epiphany support an opportunity to view the world differently, upside down, where God comes in and shakes up our status quo, socially, politically, theologically.  Things are not as we suppose they are.  They are always changing, always new and more mysterious than we can fathom.  Time stands open for us to feel a great discovery.  “Aha!  There!  I see it!”  The great challenge is then never to put that experience into a box, or build a booth around it, a tabernacle or edifice.   Be stupefied and humbled forever.  And keep your eyes open for the next epiphany.