“Lights are functional — everyday objects in our rooms and on our streets. Yet lights can be powerful symbols: signs of life, curiosity, and discovery. ”  So goes the challenge description for this week.  My first instinct was to think of the photos I took New Year’s Eve of candlelight at the table.  I’ve been experimenting with low key lighting and how to bump my camera settings to accommodate that.  But I’ve already posted some of those.  My next thought was to post one I took yesterday, and I think it’ll be my choice.  True to my own natural preference, the light I’ve chosen is the very essence and source of life, curiosity, and discovery – the Sun.  At this time of year, we drift farther away from our sustaining Star.  A gauzy shroud interferes.  We are in a state of indirect, ethereal contact.  Our longing is enhanced and unsatisfied.  We pause to ponder the diminishment.  Physically, we may suffer on a cellular level. Emotionally, we may avoid or embrace this spiritual journey into greater darkness.

I was walking through the Arboretum at the University of Wisconsin in Madison.  I came to the crest of a hill from the north and descended towards the Visitor Center when I saw this tree lit from the south by the winter sun.  I hope you like this interpretation of Illumination: 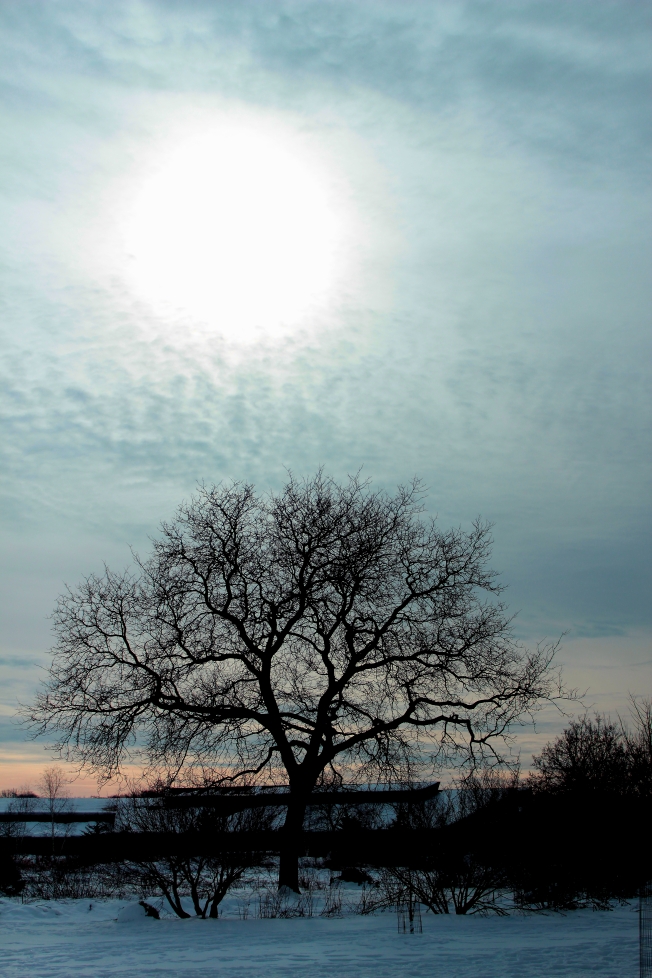 “I have had delight…” said the old man, as he was taking his leave.  Before he even finished his sentence, I threw my arms around his waist and embraced him.

This is the tail end of a dream I was having last night.  I was singing, in harmony, with a bunch of friends as we walked, ran, skipped along toward…some place.  We were singing “Chattanooga Choo-Choo”, and the old man was striding alongside, enjoying our spontaneous fun.

Disjointed happy feelings!  This is definitely the result of spending an evening with my Approximate Daughter and her First Mate.  AD has only recently changed her name from The Approximate Chef, her blogging moniker.  Her life has become filled with other pursuits, and so the blog lies dormant (unlike a yeast bread, I doubt it will double in size with the inattention).  I’m not sure what the adjective means when it modifies what kind of  a daughter she is…

I regret not bringing my camera along last night.  My daughter, who is all of 4 feet, 11 inches tall, was wearing patterned stockings, high boots and a mini skirt.  The night before, she had a gig with the punk performance art band she’s in.  She radiates energy and fun and intelligence in a combination that is the absolute antithesis of the depressing Goth style.  I would have taken several pictures of her.  Instead, they are locked in my memory.  Especially one, near the end of the meal, when she was laughing at something Steve said about an idea he has for an avant garde restaurant.  She was positively lit up – pert pixie hairdo and megawatt smile – in a way that reminded me instantly of her toddlerhood.  You know how 2-year-olds laugh with their mouths wide open, their eyes crinkled up, and their tiny bodies just wriggling with delight?  Somehow, my daughter is still an excited toddler.

I would also have taken a picture of the restaurant.   Well, actually, I would have taken a picture of the building across the street from inside the restaurant.  “Graze” is located on the square in Madison, across the street from the capitol dome, which is floodlit at night.  The entire face of the restaurant is glass, modern lines, minimalist decor, and the place was packed with people.  So imagine the ultra-swanky mood lighting inside, silhouettes and sparkles, and outside, the huge monolith of a granite dome bathed in greenish light.   It made me feel like one of the “beautiful people” just being there.

And I would have taken a picture of the food.  It was artfully delicious.  Madison is celebrating Restaurant Week where establishments offer a three-course prix fixe menu, and  Graze features food exclusively from local farms, so it was all very elegant and very fresh.  And the cocktails were amazing!  My daughter ordered The Big Small: Small’s gin infused with rosemary, lemon thyme, black pepper and capers.  So fragrant and savory!  Her First Mate ordered The Center of the Universe: Cane & Abe rum, chamomile honey, lemon juice, raspberry liqueur and cinnamon.  Steve had his standard vodka martini, I had my standard gin & tonic.  We had deviled eggs as an appetizer with that, and talked about the nearby Mustard Museum.   I had a beet salad with a delicious vinaigrette, warm blue cheese fondue, and walnuts.   Steve and First Mate had cod cakes with fava beans.  AD had BBQ ribs with a square of mac and cheese…very Wisconsin.  That was the first course.  For the second, Steve & I had the Lamb Pappardelle, FM had the pork schnitzel, and AD had the most delicious tofu dish I have ever tasted.  It was called Crispy Smoked Tofu and was served with caramelized sweet potatoes and cauliflower, roasted red pepper, shiitake mushroom, leeks, wild rice, curry shiitake sauce, peanuts and cilantro.  I would love to find out where or how they get smoked tofu…and then purchase a truckload for myself!  We drank a bottle of Bonny Doon shiraz (a winery I’ve actually been to; it’s about 30 miles from my mom’s house in California) with that course, and then got dessert.  Steve & I had bread pudding with chocolate sauce and vanilla ice cream, and I didn’t even taste the others.  I was absolutely giddy by the end of the meal.  Fine dining puts me into a “happy place” like nothing else…probably because of childhood memories of my father taking us out and being proud and pleased and well fed.  When he was in a good mood, the universe was all in harmony for me.

Me, too, Dad!  Thanks for teaching me how to enjoy food and family.