I have 4 broad cubbyholes for experience titled “Distraction”, “Entertainment”, “Useful” and “Inspirational”. This is not a system of judgment, simply an organizational game that my homo sapiens brain finds oddly relaxing. I can truly laud events in any of those categories, but sorting them is something that satisfies in a strange way, like the way I play Solitaire on the computer before bed. When I thought of all of the books in my life (and since our home is an online book-selling business, I literally have tens of thousands of books in my daily life!), I wondered how to pick which to write about. These categories are going to help me navigate this topic. Books that change lives can fall under any of these headings. 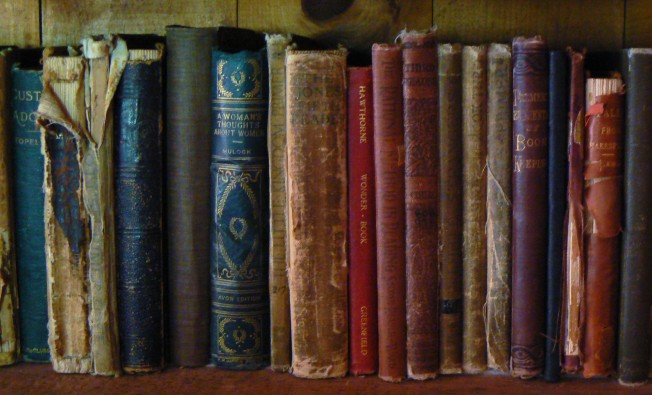 I have to start with Children’s Books because I was a child when books began to influence me. Certain Children’s Books can fit under each of those labels. Did you ever try to distract a child in tears by offering to read a story? Sure. Did you ever pick up your jacketless copy of Ferdinand and flip to the illustration of the contented bull under the tree smelling flowers because you were seeking escape? Yes! So maybe “Distraction” is a place where some of my favorites can be filed.

“Entertainment” is a fine role for a Children’s Book. Pure imagination (Roald Dahl), puzzle-solving (Graeme Base, I Spy…), and song and dance (Priscilla Superstar, Eloise) come to mind. Rhyming books by Dr. Seuss and Bill Peet were always fun to read aloud to my kids. Of course, I do voices. (After all, I was a Voice Performance major in college and a theater teacher!) Books can serve up silliness in all shapes and sizes. 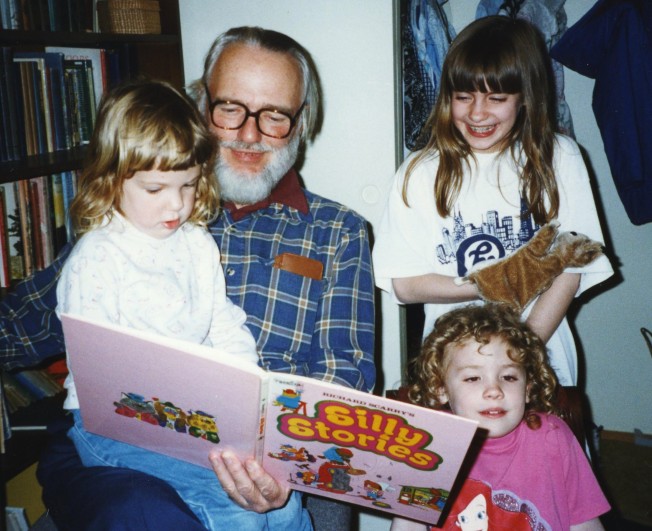 A child’s book becomes “Useful” when it has a gentle way of teaching a very important lesson. I loved Babar immediately, and slept with a plush version each night, thumbing the yellow felt of his crown until its softness lulled me to sleep. I learned to respect animals and humans, that responsibility can bring anxiety, and that belonging to a community helps you to feel secure and peaceful.

When I think of books that are “Inspirational”, I think of them as initiating changes that transcend mood and feeling and circumstance. Perhaps you can call them “paradigm-shifters”. Every so often, a Children’s Book has that kind of impact, too. They defy the age-ism of the Children’s or Young Adult section. The Lorax, The Chronicles of Narnia, The Little Prince, A Wrinkle In Time. These books introduced me to the realms of mysticism and philosophy that I began to explore in greater depth as an adult. Ishmael by Daniel Quinn. Poems by Hafiz.

There are iconic books that have shaped my life that I think I would put in a separate cubbyhole, perhaps shaped and decorated more like a shrine. These are sacred texts: The Bible. The Road Less Traveled by M. Scott Peck. When Things Fall Apart by Pema Chodron. The Miracle of Mindfulness by Thich Nhat Hahn. They became almost monolithic in my life journey at certain points. Most of the goods manufactured by human beings are problematic to me. Luxury items strike me as senseless and leave me completely cold. Clothing is necessary but has a seamy underbelly in Fashion. You don’t even want to get me started on Plastic! But Books – well, they could be the veritable justification of civilization itself, as far as I’m concerned. I cannot imagine my life without them.

This essay is featured in this month’s issue of  The Be Zine. To see the entire blogazine, click HERE.

Laura Ingalls Wilder was born in Wisconsin in 1867, in a Little House in the Big Woods (near Pepin, WI, close to the border of Minnesota).  Mary Hafford, the Irish immigrant who lived in the house where I work as an interpreter for the living history museum, Old World Wisconsin, was widowed in the year 1868 with 3 small children and lived as a renter in a small village near Watertown, WI.   The Ingalls family continued to move west and eventually set up a homestead in South Dakota, but Mary Hafford worked away at her home laundry business and eventually achieved social and economic prominence in her little village.  In 1885, she had a new house constructed on the property that she had bought.  She never learned to read or write, but her children did.  Her youngest daughter, Ellen, studied dressmaking, a skilled trade, and became a live-in dressmaker.  Ellen was married in 1891 (six years after Laura Ingalls married Almanzo Wilder), and her mother hosted a reception and dinner for 75 guests.  Three months later, Mary Hafford died of dropsy.  I imagine Ellen Hafford Thompson and wonder what stories she might have written about her life in the Little House where she lived.  I have a burning question: what happened to her older sister, Ann, who is conspicuously absent from all records from the mid-1880s on?  Did she die?  If so, why isn’t she buried next to her father & mother?  Did she go into a convent?  Did she elope with a Lutheran?  The mystery remains unsolved!

A shadow box memorial to a young woman who had taken religious vows. The braid that was cut off is all the family would ever see of this loved one after she went into the convent.

My mother makes a very satisfactory leader of my Fan Club.  She is, undoubtedly, First Fan, as many mothers are.  The hallmark of her grace is in the way she embodies this position, not simply as a role, but as a genuine expression.  I never get the feeling that she encourages me out of obligation.  I believe she really likes me.  What a stroke of good fortune!

This morning I got an e-mail from her titled “catching up on the blogs”.  I felt her heart bubbling over like she had just emerged from an afternoon reading a favorite novel.  She had associations, appreciations, memories, connections to share, like her synapses were fireworks going off.  From a reader to a writer, this has got to be the highest praise.  She started off by remarking, in all caps, that there has to be a book in this somewhere and that she wants an autographed first edition.  Aw, Mom!

My mom is not a literary push over.  She has a degree in English from Radcliffe (now coed with Harvard).  She devours books regularly and always has.  Her typical posture these days is sitting in her high-backed rocker with knitting in hand, book strapped in on her reading stand, mind and fingers flying.  She used to hide away in her bedroom with a bag of snacks and emerge an hour or so later with renewed energy to tackle her household obligations, sporting a kind of secret glow.  Get her talking about one of her recent historical sagas, and she will enthusiastically engage for hours!  I love seeing her pull thoughts that have been carefully laid aside like unmatched socks and bundle them together with a flourish of discovery and pride.

She recently told me that her doctor mentioned her good prospects for living another 20 years.  That would make her 97; she wasn’t sure she’d want to live that long.  But think of all the books you could still read!  Or that could be read to you, if the cataracts cause the eyes to fail.  I can still hear my father’s voice reading to her behind the bedroom door.  His partnership to her intellectually was so rich, until Alzheimer’s whittled his brain away.  I wonder if she feels the same phantom guilt I have in enjoying a healthy body and a sound mind after our husbands’ deaths.  Well, I suppose consciousness is a responsibility to approach with reverence.  We live, we feel, we think, we read, we make connections still.  May we both bring life and light to the world like fireworks, Mom, as long as we are able.