This morning, I posted a Photography 101 assignment on Bliss.  (You can scroll down to see that or click on the link to the right under Recent Posts.)  I “bliss out” when I am with people I love who love me.  I am a Lover by temperament.  I get all relaxed and happy and dreamy when my love tank is full.  It feels very nice, and I tend to fall asleep.  This is bliss.

The other side of this, the fierce energy of love, is not far away, however.  I CARE about my loved ones.  I CARE about the environment.  I have a lot of beautiful landscape photos on this blog.  Those would depict the bliss I feel about loving the Earth.  But it’s not a sleepy bliss.  My relationship with Earth is not in the blissful, dreamy lover stage.  The Earth is in distress, and I am in distress with it.  The election results this week are chilling to me.  I got this letter from the Natural Resources Defense Council yesterday:

“Prepare yourself. Yesterday’s election results will put the Senate under new management, and its incoming leader — Senator Mitch McConnell — has made no secret of his pro-polluter, anti-environmental agenda.

Simply put, come January, both houses of Congress will be run by a faction of climate deniers and friends of the Koch Brothers. A list of the attacks they have threatened to unleash is as long as it is alarming —

They want to force approval of the Keystone XL tar sands pipeline … cripple the President’s bold plan to crack down on the power plant pollution that is driving climate chaos … open the Arctic Refuge to oil drilling … launch a full-blown attack on the Endangered Species Act … restrict the government’s ability to protect our drinking water from fracking … slash budgets that promote clean energy … and strip the EPA of its authority to block the disastrous Pebble Mine.

… GOP leaders are making a huge mistake — a potentially fatal mistake — if they think this election has given them a mandate to deepen our addiction to fossil fuels and shred our environmental laws.

Poll after poll shows overwhelming support for strong environmental protection. An ABC/Washington Post survey has reported that 70 percent of Americans view climate change as a serious problem and want the government to tackle it.

House and Senate leaders ignore these facts at their peril. …But, historically, there seems to be something about the headiness of victory that makes the fossil fuel lobby overreach and try to ram radical policies down the throats of the American people.

We’ve seen this movie before. In 1994, Newt Gingrich swept to power in the House, brandishing a “Contract with America” that never mentioned the word “environment.” But once installed, the new majority claimed a mandate for undoing 25 years of environmental protections.

NRDC and our allies fought back hard by mobilizing an enraged public; more than one million Americans wrote or phoned Congress in protest. In the end, the House leadership gambled everything — their budget, their power, their agenda — on an extremist assault on nature. They lost, and found out the hard way that protecting the environment is a bedrock American value.

We must do no less this time.

NRDC will bring everything to bear — the grassroots power of 1.4 million Members and online activists like you, the advocacy clout of our legal and scientific teams and the unmatched effectiveness of our rapid response operation — to stave off Mitch McConnell’s Big Polluter Agenda.

But playing defense is not enough. If we are to avoid the most catastrophic outcomes of an overheating planet, we’ve got to prevail on the Obama Administration to reject the Keystone pipeline, deliver on the toughest possible power plant rules and move America beyond all fossil fuels as rapidly as possible.

That is our planet’s last best hope for a sustainable future — and we are not going to let Congress stand in the way.”

I want to use the anger energy that is in my fierce love for this beautiful world to make a difference in the policies and mindsets that determine action.  I vote, I blog, I talk to people I know.  I want to raise awareness, to educate if I can.  Why are we harming the ones we love?  It is madness.  The opposite of bliss. 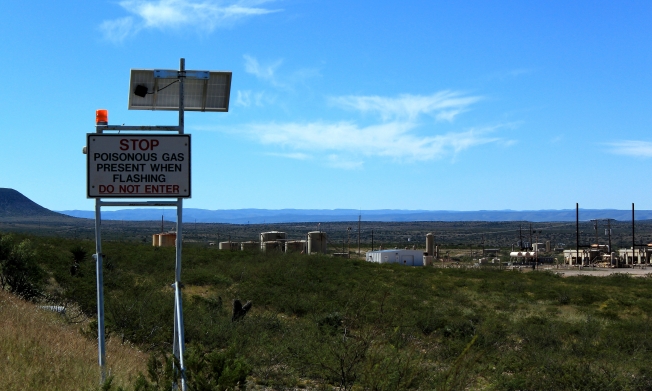 Sign along Hwy 137 in New Mexico; near Guadalupe National Park and Lincoln National Forest…and oil wells. “Generally, any gas- processing facility where hydrogen sulfide is present at concentrations of 100 ppm or more must take reasonable measures to forewarn and safeguard people that have occasion to be on or near the area. Wells drilled where there is substantial probability of people encountering hydrogen sulfide gas in concentrations of 500 ppm or more must have warning “poison gas” signs.”