How did people in the northern land of Wisconsin stay warm through those hard winters in the 19th century, without electric blankets, natural gas furnaces or radiators?  Wood fires, wool, fur and the sauna…naturally. 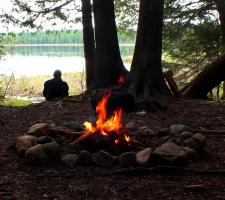 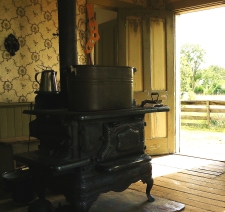 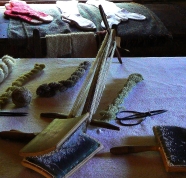 Seems pretty simple to me.

(In response to the Word Press Weekly Photo Challenge.)

Happy Winter Solstice, everybody in the Northern Hemisphere!  As the sun hits the lowest spot on the southern horizon, it seems to stop in a lyric caesura for a moment.  Now the earth begins to doe-Si-doe around its stellar partner, coyly tilting the top of her head toward him.   The night is long, and the dance goes on.  Passion builds towards the summer solstice when the sun will caress the earth with daylight for 24 hours at the North Pole.  Humans have celebrated these celestial events with festivals for centuries, and we still do.  As I write this, Strauss polkas punctuated with small, percussive explosions and various train whistles play in the background.  It is riotously fitting.  (Steve is cleaning, stacking and re-stacking his books.  We are expecting company for the weekend.)

The door marked 21 bangs open, and the gift unveiled is Passion.  Enthusiasm!  Energy!  I contend that this is another Universal endowment.  The word ‘enthusiasm’ has at its root the Greek ‘theos’, meaning God.  To be enthused is to be filled with God.  “In the throes of passion.”  See Bernini’s sculpture of “The Ecstasy of St. Theresa” for a marvelous visual example.  (We watched a video on this narrated by Simon Schama: “The Power of Art”.  Highly recommended!)  Is this kind of experience available to all or just the sainted few?

I believe that if you are open to the energy of passion, you will receive it.  And I believe this fact scares a lot of people, especially those in authority who are working to gain and maintain control.  Do you want to live in a passionless world?  Do you want to live in a tempest of energy?  Do you seek some Middle Way, a quiet infusion of God?  How have you marshaled and channeled energy by your own choices?  Have you felt someone else’s hand tempering your energy?

Excited to be back in Massachusetts (Photo by my oldest)

I think I was a pretty enthusiastic kid.  I was often told that I was loud.  My facial expressions were pretty dramatic.  I loved theater and the chance to “act out”.  My third grade teacher wrote in her notes to my mother that “the play’s the thing for your youngest daughter”.  I did feel that my parents were always asserting a more reasonable response.   They were intellectual and Anglican and well-mannered.  I wanted to please them, so I didn’t allow myself to be wild.  When I began voice lessons in college, one of the first things my teacher said to me was, “You sing as if you’d been told all your life to modulate your voice.”  How did she know?  So I had become outwardly prim and proper and covertly silly and animated.  My passion for my husband was greeted initially by my parents with the same kind of circumspection.   After all, I was only 15 when we met and 20 when we became engaged.  Gushing about how I “knew” he was the right one for me was unconvincing.  I prepared logical and practical reasons why I should marry before I graduated from college and while we were both unemployed.  His father was not at all persuaded.  My father had seen us courting and knew more intuitively that our determination was real, fueled by much more than reason, and that in a marriage, that is a definite harbinger of success.

I am still hesitant to show emotion and passion.  Steve is always delighted to see my enthusiasm about something, and frankly wary because it doesn’t assert itself in important decisions.  I was brought up to be very serious about decision-making, and to mistrust my enthusiasms.  Steve seems to approach the issues from the opposite direction.  He feels that the best reason for doing something is because you REALLY WANT TO!  In some ways, that seems like a no-brainer.  Problem is, I have esteemed The Brain far too much, I think.   So, I am learning to try to listen to those exuberant voices without shushing them so much.  And I am learning to be more open to the zeal of others.  My children, especially.  My parents modeled the “voice of reason”.   I can’t deny that I play that role in my parenting, but  I want to model the fervent voice of encouragement, too.  (This goes along with the ongoing safety/adventure discussion that I have with Danger Mommy.)  I keep trying to get away from dualism and embrace the dynamic whole.  “Don’t be so worried about ‘supposed to’,” says Judy Dench’s character in the movie “Chocolate”.

I began this blog 200 posts ago, and there’s nothing in this world that I don’t know…

Well, that’s not true, but I’m remembering my father sitting in his chair on our wrap-around porch singing old silly songs as the sun went down.  “I was born about 10,000 years ago…” verse after unbelievable verse.   There’s a lot in this world that I don’t know and will never know, and many things that I can know if I pay attention and try to be aware.  One thing I became aware of is that my blog was hard for my mother to read in its old format.  The light text on a slightly darker background was obscured through her developing cataracts.  I hoping that this new look will be clearer for her.

Another thing that I’m becoming aware of is the way that thoughts influence energy.  Life is difficult (opening line of M. Scott Peck’s The Road Less Traveled), in other words, living requires effort.  Solving problems, finding food, making money, communicating – all of that takes some energy, but sometimes the energy returns to us if the process is positive and life-giving.  When I feel drained and sad and depressed, it’s often simply because my thoughts about problem solving, making money, and other efforts of living are not positive.  In another Summit with Steve this morning, I asked myself this question, “Are you going to roll up your sleeves or roll up your eyes?”  Steve offered an illustration from our favorite National Basketball team, the Chicago Bulls (President Obama is also a loyal fan).  Rookie Jimmy Butler, brand new to the team, has a life story that exemplifies the effort of overcoming obstacles.  He was abandoned by his father at an early age, kicked out by his mother at 13, raised by a widow with 4 children who remarried a man with 3 more children, and finally made it to Marquette University and the NBA.   He is part of the energy infusion we fans call “The Bench Mob”.  They’re not “good enough” to be starters, but when they go into a game, they roll up their sleeves and get to work!  Another member of “The Bench Mob” who has a totally different physical attitude is Omer Asik.  We love him, because he’s nerdy-looking like us.  He’s tall and skinny and white.  He’s from Turkey.  He is a great basket defender, but he’s pretty new to the team, too, and not as athletic as many players.  He has this comical hang-dog expression when he fouls someone or misses a shot.  He literally rolls up his eyes, instead of his sleeves.

Energy ebbs and flows.  Sometimes I roll up my sleeves, sometimes I roll up my eyes.  Here’s another comic example: Buster Keaton.  Mr. Keaton had a stellar career in silent films.  He’s a little guy, very physically strong.  His acrobatic stunts on camera are amazing.  His comedy is also about solving problems, thinking outside of the box and using his incredible energy.  Of course, he doesn’t squander any energy talking!  His reaction to social situations is great.  He doesn’t let them deter him from going after what he wants, and whenever he fails, he simply tries a new tactic.  See any of the clips from “College” (1927) that you can find…or the whole film!  He makes a great movie star hero, in my book.

So, this one’s for me, my kids and anyone else out there who is putting effort into living.   You are not your thoughts.  If your thoughts of failure and shame are draining your energy, listen to them and then change them.  Are you really ashamed of yourself?  Or is that a perception of what you think ‘society’ thinks of you?  The truth is you are a good person and you desire to be a good person (most likely – granted there may be exceptions).  Roll up your sleeves, Good Person, and play!

A couple of really Good People rolling up their sleeves!