This article appears in The Be Zine. To see the entire issue on theater, click HERE.

What has Theater taught me? Ego indulgence and humility. Confidence and neurosis. Teamwork and competition. Empathy and retreat. Deception and honesty. The story of humanity in a microcosm. My story.

When I was a little kid, I learned that I could entertain and amuse my parents and my older sisters and get positive attention. As the youngest of four daughters, I was eager to exercise this talent to my advantage whenever my ego felt bereft. This helped me compensate for having fewer general skills and powers than my seniors. I couldn’t win at games or read or figure or run better than the rest, but I could sing and mime and look cute. I also was the only blonde, which helped. 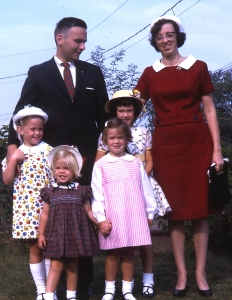 When I was in second grade, I was very good at reading aloud “with expression”. I remember (and still have a written report about) my behavior when the class did a Reader’s Theater story about a snake. I told the teacher that I had a toy snake the class could use…provided that I got to read the lead role. Mrs. Richie declined my offer.

When I was in third grade, Miss White selected me to play Captain Hook in the musical Peter Pan. I was stunned. “I’m not a boy!” I protested. She told me privately that she thought I’d do a better job than any of the boys in the class. She could tell that I was a ham and would take risks to win attention and applause. And I did. In the final week of rehearsal, she gave me a monologue, a poem in rhyme that she would put into a particular scene if I could memorize it. I worked on it very hard. In the final performance, though, I skipped it altogether because I forgot where it was supposed to be inserted. To this day, I can rattle it off by heart. “Methinks I hear a spark, a gleam, a glimmer of a plan….” 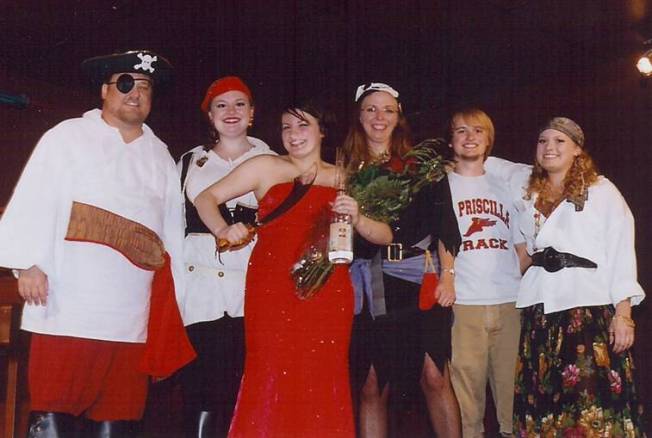 The pirate theme lives on in my legacy.

When I was in seventh grade, I was double-cast as the lead in our pre-Bicentennial musical. I was the Spirit of ’75 for two performances (why the Music teacher and the Home Ec teacher chose this theme a year early is anyone’s guess). So was Kevin Bry. Yes, I played a man. Again. I vividly remember being in performance and feeling sort of bored with the dialogue the teachers had written to link together the songs the school chorus had rehearsed. So I decided to overact. “The sun still rises in the East….doesn’t it????!!” The audience roared. I think they were pretty bored, too.

When I was in High School, I took real Drama classes. I learned to dance, and I gained some confidence singing solos in the Concert Choir and the Jazz Choir. I became a lot more aware of my own vulnerability, too. I will never forget the Talent Show in my Junior year. I was in a leotard and character shoes, posed and ready to dance when the curtain went up. I was listening for our taped music to begin. And I heard nothing…until the audience started to howl and whistle. Suddenly, I felt naked and taunted. Then the music started, and I couldn’t concentrate on it. I was humiliated. My father and mother and boyfriend (who became my husband) were in the audience, hearing those students jeering at me. We all went out for ice cream afterward, and they tried to convince me that the performance wasn’t bad and the audience wasn’t being critical, but I just wanted to block the whole thing out of my memory forever. Obviously, I haven’t.

When I was in college, I was a Music major with Voice Performance as my Senior thesis. I auditioned for a part in a Gilbert and Sullivan operetta as a Junior. I hate auditions. I tend to choke when I know that someone is out there in those dark seats judging me. I am awesome in rehearsal – prepared, alert, willing and tireless. I was working hard, getting better at performance in my Master Classes and feeling more and more that my teachers and colleagues were actually rooting for me. But not at an audition. I was nervous, my mouth was dry, and my voice wavered. I could see my choir teacher in the house, talking with the casting director. I am sure that Prof. Lamkin was telling him that I was a very good soprano despite my weak scale runs in Mabel’s aria. I managed to land a part in the chorus. 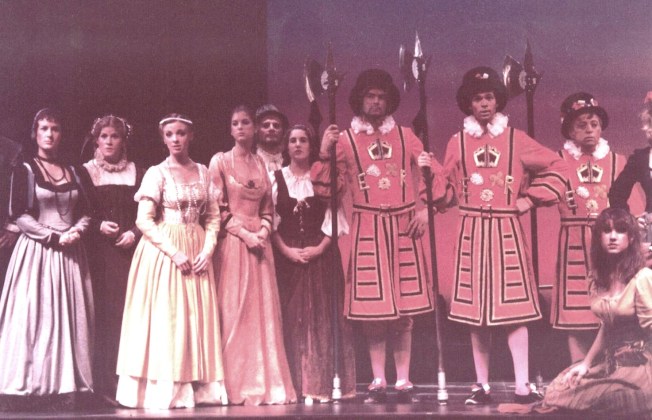 That’s me, third lady on the left.

After graduating Phi Beta Kappa with my B.A. in Music, I auditioned for the Los Angeles Master Chorale. Worst audition EVER! Oh well. I found out that I was already pregnant. Got the role of Mother at age 22…and 24…and 26…and 28, and stayed off the stage for years. Meanwhile, my husband performed all over the country with a competitive Barbershop quartet and once at Carnegie Hall with the Robert Shaw Chorale Workshop. 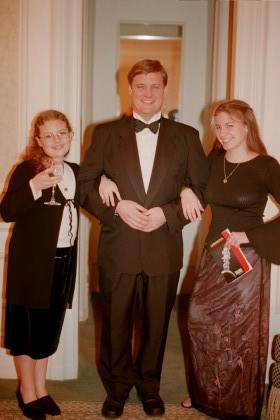 My children were on stage quite a bit, too. I was their coach. They were in all the school concerts and plays, took dance and music classes, and I watched and cheered and videotaped my heart out. 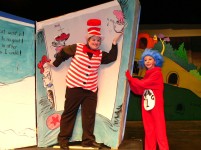 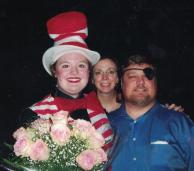 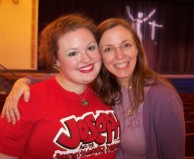 Then some neighbors invited me to help them start a Community Theater. I was tired of being in the background. I stepped up, and brought my oldest daughter with me. The next summer, I brought three of my children, my husband, and my mother-in-law as rehearsal accompanist. The next summer, it was just me, and my husband told me that he wouldn’t be able to solo parent while I was at rehearsal after this. Meanwhile, he was performing with the Chicago Master Singers and rehearsing every week. A few years later, my youngest daughter started taking theater classes with a group called CYT. The next summer, they did a community theater production, and I auditioned again and got cast. My oldest daughter played in the pit band. One of the performances was on my birthday, and the director brought me out on stage for the audience to sing for me during intermission. * shucks, folks! * 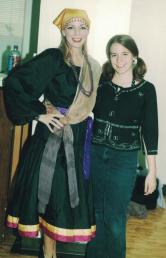 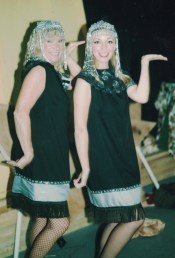 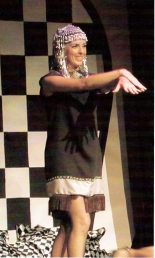 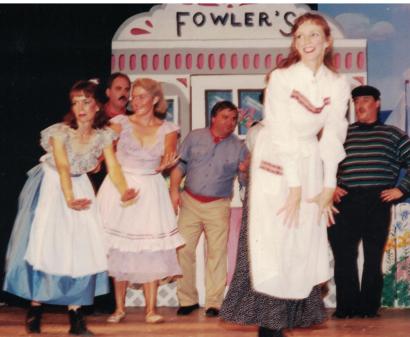 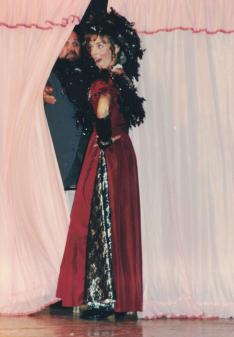 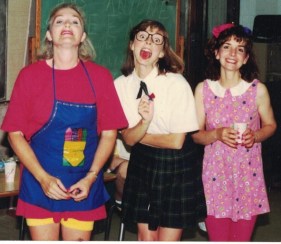 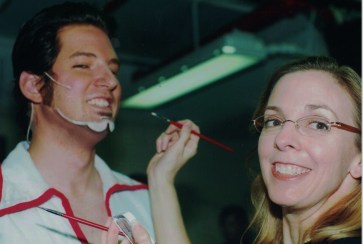 I ended up working for CYT and becoming their Operations Supervisor full time. In addition, I taught Voice classes and Musical Theater classes and Show Choir classes to kids aged 8-18 after work. All of my children and my husband participated at some point in the seven years I was employed there. I watched kids grow up in the theater, auditioning three times a year, growing in confidence and artistry, and questioning their identity every time.

“Who am I, anyway? Am I my résumé? That is a picture of a person I don’t know.” A Chorus Line 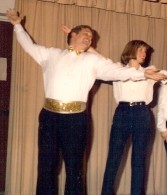 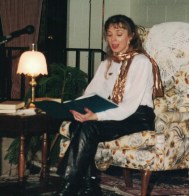 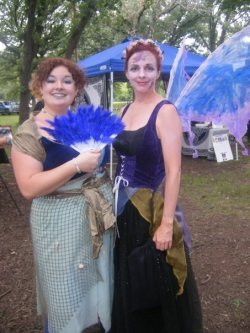 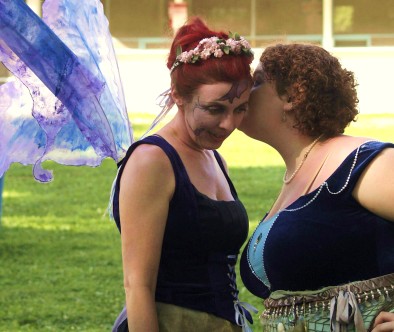 Accessing emotions, improvising with another person’s energy – initiation, response, vulnerability, defense. Mime, mimicry, mannerisms, artifice and accents. Playing in the muck of human behavior. This is Theater. It can be devastating and edifying. You can lose yourself and find yourself or never know the difference.

I wonder if I should regret raising up a bunch of performers and encouraging them in this charade or if I should be proud to have modeled survival in the arena. I don’t know. It’s complex. We’re complex. And maybe that’s the entire lesson.