This essay originally appeared in The BeZine’s September issue, for which I was Contributing Editor.

“Environmental Justice” is a rather fancy framework – two words with seven total syllables to convey a concept. Let me give you a simpler structure – one question to ask yourself as often as possible. How will I behave here? Five important words make up this question, and each one can continue to yield insight the more time you spend with it.

Let’s start with the subject – ‘I’. Bringing awareness to how you think of yourself is a huge step in understanding – not just for environmental justice, but for Life in general. Know thyself. What are you biologically? How do you fit in the ecosystem or the food chain? Do you have a beginning or an ending? What does it take for you to survive the middle? Who are you psychologically? What has influenced that and what makes that change?

The direct object in the sentence is ‘here’. What is the Here that you relate to ? I suggested in the writing prompt “Tell Me: What IS Environmental Justice?” that our contributing authors may look at the environment from a perspective of Nature, Place or Community. As you ask yourself this question on a daily or more frequent basis, Here will be increasingly specific.

Now the verb: ‘behave’. It’s the act of acting; perhaps it’s all verbs in one. What we do matters. In my work as a volunteer at a Nature Center, I learned a short maxim for Environmental Education. It was made up of 4 words beginning with ‘A’: Awareness, Appreciation, Attitude and Action. Action is the outcome of our character. A lot goes into making us who we are, but it’s who we are that will most influence what we do. There are those who hope to influence action from the top down and employ legislation, incentives and consequences. There are those who hope to influence action from the bottom up and employ education, compassion and liberty. Behavior is often the event that gets a conversation started, the outward and visible sign of internal forces. We see video clips in the news and wonder, “Why THAT behavior?” (the Oregon rock tippers, graffiti in National Parks, buffalo calf rescuers, photographers disturbing marine life, etc.)

The word ‘will’ in the question can be both a verb tense and a noun and makes a great pondering point. What is your Will? What do you desire, hope for, intend, long for, want, choose and champion? You get to bring all your personal energy into this question. You will behave in some way. You will act or refrain from acting one way or another, and this will make a difference.

Finally, we’re left with the very first word: HOW? This is where we’re invited to expand our imaginations and reach toward infinity. This is where creative people can lead and model and catapult the status quo toward a more distant target. It is also where we can entrench ourselves in habits, in conservative approaches that allow for little or incremental change, in comfortable measures of disturbance offset by self-congratulation. This HOW will be the expression of our will and our identity.

So, think and ask: How will I behave here? That is how you will engage in Environmental Justice.

And you will engage, whatever you do. 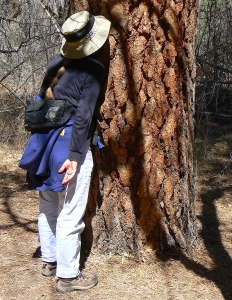