My grandfather’s little tax deduction for the year 1934 arrived on New Year’s Eve.  Anne Louise McFarland, my mother, grew up believing that all the fireworks and shouting every year on this day was in honor of her birthday.  I grew up believing something very similar.  My parents didn’t dress up and go out on New Year’s Eve…they dined at home on champagne and escargot and caviar and other delectable treats while listening to “The Midnight Special” on WFMT or to “Die Fledermaus” on TV or video.  When I was old enough to stay up with them, we would sometimes catch the Times Square celebration and then declare East Coast midnight and go to bed an hour early.  But the reason for the season was my mother, not the march of time.  In my late teens, I didn’t go to other people’s parties, I still stayed home…and my boyfriend (soon to be husband) joined us.  We enjoyed the best food and champagne and music and silliness and company without ever having to contend with drunk drivers on the roads.  My mom lives 2,205 miles away from me now, but I am still planning to stay home and drink champagne and eat salmon and listen to wonderful music and think of her.  She is still reason enough for all the joy and love and delight you might see tonight.  I’ll show you why: 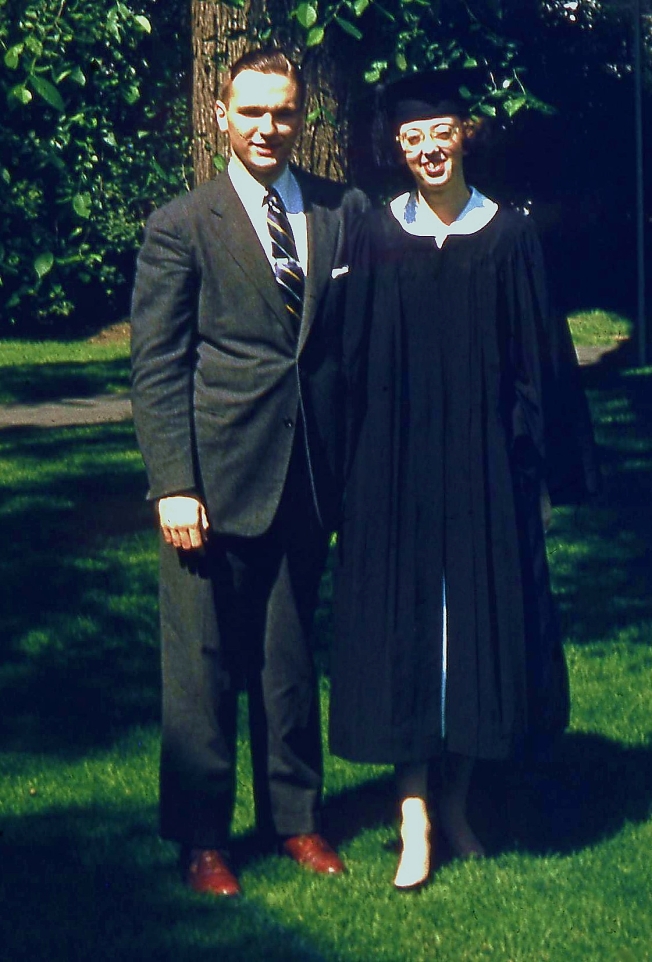 This is my mom and dad at her college graduation.  That’s right, she graduated from Radcliffe, the female component to Harvard, at the age of 20.  The woman has brains.  With her late birthday and having skipped a year in elementary school, that means she went to college at age 16, all naive and nerdy with bad teeth and a lazy eye and glasses, but with a curiosity and charm that matured and eventually proved irresistible to my father, who, with money and pedigree and a Harvard degree, was “quite a catch”. 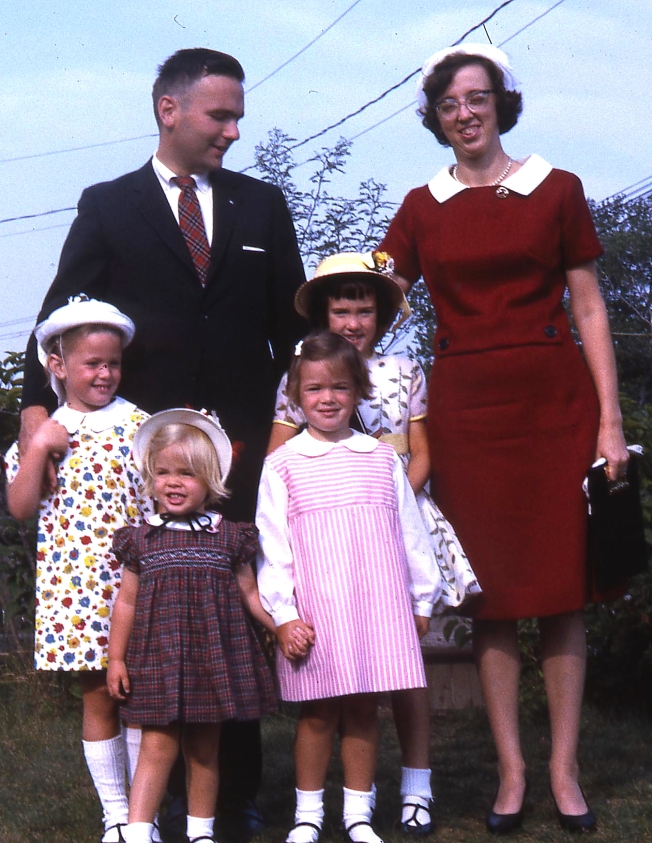 So, by 1965, she’s a mother of 4 little girls (that’s me, the baby, blonde, aged 3), running a household, volunteering with Eastern Star and the church and a host of other things.  So stylish, so Jackie!  This was Massachusetts, you know. 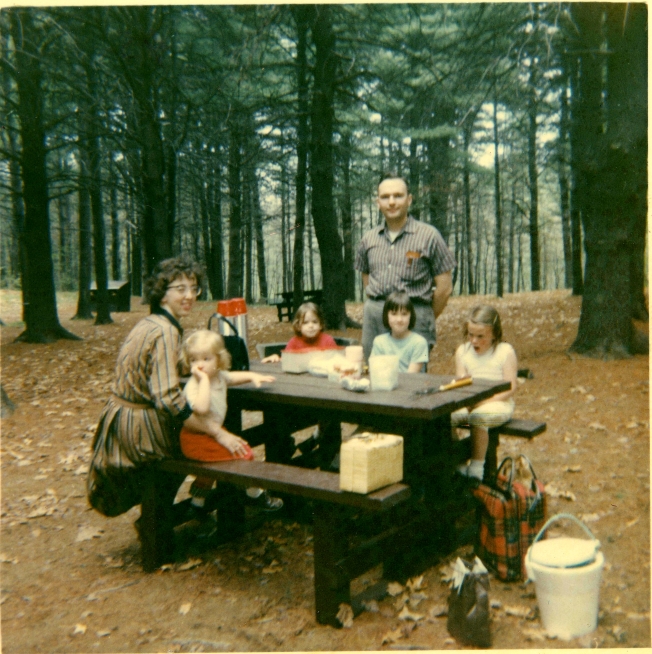 And she’s not afraid to go camping, either.  This was a picnic picture taken by her mother-in-law.  That would explain the handbags and the dress.  My grandmother was never seen anywhere without a handbag and make-up.  My mother was…often! 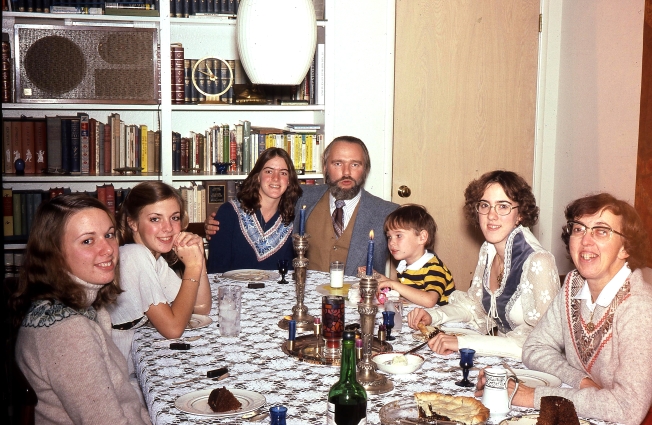 Fast forward 13 years.  My mother gave birth to a boy when she was 38.  She had 4 willing babysitters surrounding her and a handsome husband now sporting a beard.  She’d also picked up a Masters degree in Church Music.  We moved from Chicago to California where she became more adventurous in cuisine and hiking and music and new volunteer opportunities.  This photo was taken the last Christmas that all her children were alive.  My sister Alice (far left) died the next August. 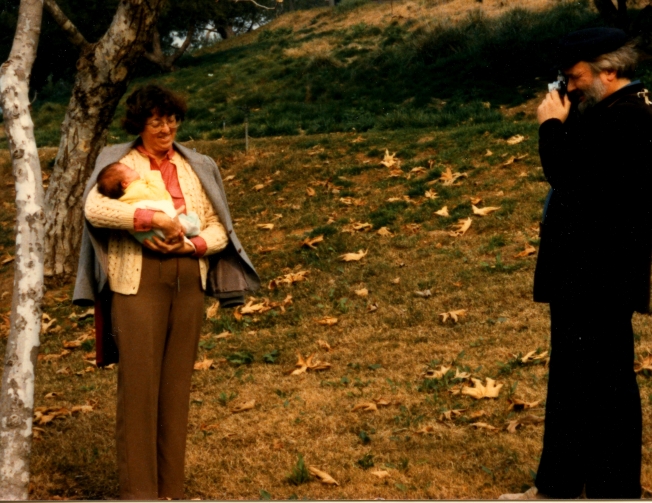 A month after she’d turned 50, my mother became a grandmother for the first time.  She’d also survived breast cancer by electing to have major surgery, something her own mother had done 10 years earlier.  She was housing and caring for her barely mobile mother and raising a pre-teen son at this time as well.  Do you see a grey hair?  No?  Neither do I.  My mother is amazing. 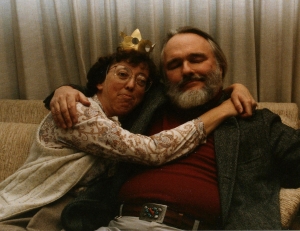 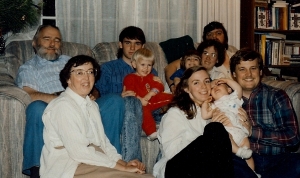 Mom turns 55.   She has 4 grandchildren, a 16-yr old son, and her mother has just died.  She’s volunteering as a docent at the San Jose Historical Museum, a position she will hold for more than 20 years, specializing in their music department. 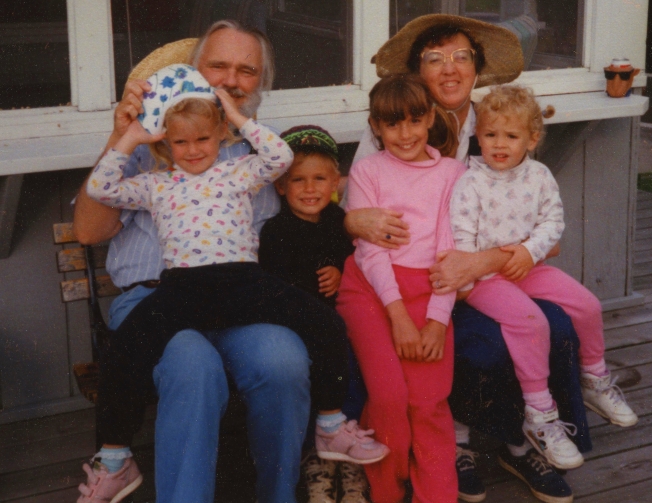 Here, she’s 60.  My husband and I are traveling in Europe for our 10th anniversary, and she and Dad take our kids to the beach cottage for a few weeks.  My husband survived double bypass surgery on his heart two years earlier.  Yeah, Mom came out then, too, to take care of the kids…and me.  Who has the energy to be with 4 kids (aged 3, 5, 7, & 9) at the beach for two weeks at the age of 30, let alone twice that?  My mother.  Although she did let me know (graciously) that it wasn’t easy. 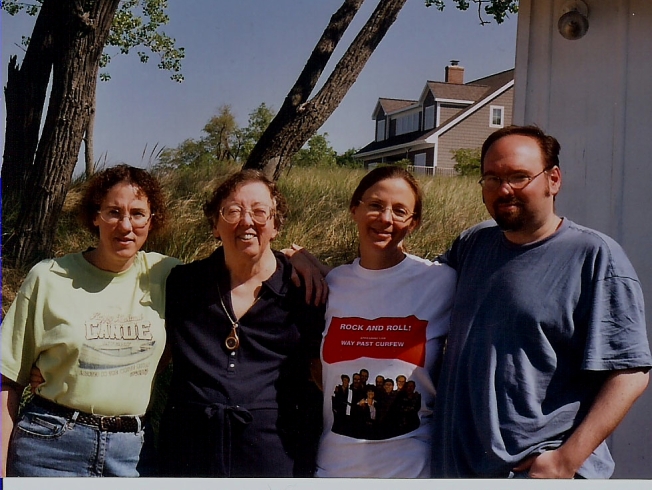 13 years later, back at the beach

In 2007, Mom came out with my sister and brother to see my daughter graduate from college.  We all went to the cottage together again.  This was my husband’s last trip: he died the following February.  My father is not with us on this vacation.  He is in the advanced stages of Alzheimer’s disease, a condition he had for 7 years before his death.  My mother visited him several times a week while he needed skilled care and played the piano for all the residents, jogging memories with old popular tunes and supporting the hymns during chapel services. 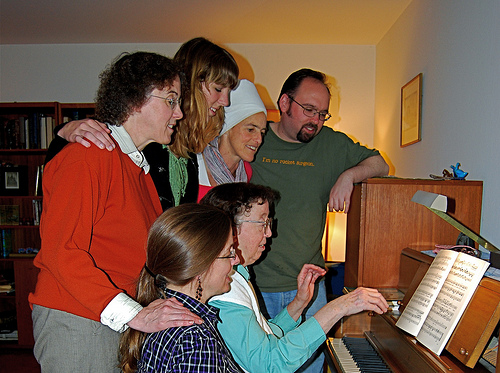 My father died in March of 2010.  I had been widowed for 2 years.  My kids and I flew back to California for his memorial service, and Dad’s ashes were buried next to my sister’s and my husband’s.  My mother invited the family back to her house and we gathered around the piano again.  She played and sang and laughed and cried, and I did, too, right by her side.  My mother and I are alike in many ways, and I am so glad, proud and grateful to be a woman like her.  I see her smile, I hear her voice, I taste her cooking and her tears, and feel her spirit flowing around and through me all the time.  We’re going to party tonight, Mom.  Miles be damned!  Happy Birthday!  I love you!