Where is there dignity unless there is Honesty?  — Cicero

Today I’m parading Honesty around the block, free for the taking – a gift for December.  Does it cost to be honest?  There definitely are consequences to being honest.  Integrity, for instance, but sometimes something much more harsh.  Here’s a Socrates Cafe question: is it ever morally defensible to tell a lie?  Here’s a Biblical philosophical question: what is truth?  (For 3 pieces of cheese, tell me who asked this question to whom?  For all the cheese in Wisconsin, tell me why that person never answered?!) *n.b. – My father used to play a game with us that we called “Bible Questions for Cheese”.  He would quiz us on our Biblical knowledge after dinner and reward us with bites from his cheese platter as he finished off his bottle of wine.

Telling the truth about myself to others is something that I want to do.  It saves me the trouble of having to come up with a lie.  It allows me to get that feedback I need to find out if I’m deceiving myself.  But sometimes, I detect that TMI reaction.  Too Much Information divulged to your own offspring, for example, is not at all welcome.  Especially when they’re young.  I’ve done that a few times.  More often, I told them the truth about things, facts, at an early age that others did not think was appropriate.  For example, I told them that Santa is fictional.  I told them names of body parts.  (My oldest was 4, I think, when she gave a word for the letter ‘V’ that rather shocked her nursery school teacher.)  I told them that their father had coronary artery disease.  (Again, my oldest could draw an anatomically correct heart from memory at the age of 6.) 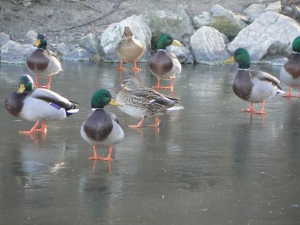 Ducks can walk on water. It's the truth!

Telling myself the truth about another has been difficult only on a few occasions that I recall.  Telling myself that my father was not God and was not perfect was one.  Telling myself that my husband was dying was another.  However, in those situations, the truth was very valuable, and the difficulty was well worth it.  I guess that means I defend more delusions about myself than about those whom I love.  I believe that shattering delusions about myself will be similarly painful but beneficial, so I’m willing to keep at that.

Telling ‘your’ truth about another to that other is what Steve likes doing the most in relationships.  He calls it “being challenging” or “being intense”, and he considers it a supreme act of love.  And he does it kindly, in my opinion, but more importantly, he is conscious of trying to do it kindly.  It isn’t always received that way, though.   Sometimes, no matter how tactful and kind you try to be, that ‘other’ is not going to want to hear your truth.  Hopefully, that reaction is only temporary.  Getting to the point of engaging with truth in a relationship is an important step to intimacy.  It’s what being ‘truly loving’ is all about.   It takes grace to invite someone to that point in a way that is non-threatening.  I appreciate therapists and psychologists and psychiatrists everywhere who take up that practice in the name of love.