Last night we watched Werner Herzog’s film “Grizzly Man”, an amazing documentary featuring Timothy Treadwell’s video footage of grizzly bears in Alaska.  He spent 13 summers among them, mostly alone, and eventually he and his girlfriend were attacked and eaten by one.   This man was quite a character — often childlike, flamboyant, furious, arrogant, gentle, fearless and completely whacked.  At the core, though, he seemed to be straining toward a connection he deeply valued.  He wanted to bond with the bears, he may have even imagined he could become a bear.  It approximates a desperately unrequited love.  His affection for them (and for the foxes that follow him around and play with him like puppies) is palpable, although sometimes articulated in a corny, self-help guru fashion.  “Thank you, Mr. Chocolate, for being my friend…”  Okay, Fred Rogers he’s not; more like Richard Simmons.  It’s kinda weird.  But, still, he loves them; he would rather die with them than be anywhere else.  The pristine wilderness shots convey the aching beauty of the ideal.  The close ups reveal more reality: flies cover the lens and buzz around the speaker without ceasing.  Then there’s the inherent danger.  Treadwell is aware of the risks he’s taking; he talks about them quite theatrically to the camera, but they do not seem important.

Is he nuts?  Is he an idealist?  Is he wrong?  Is he inspiring?  What do we tell our kids about such passions?

I led 4 small groups of Boy Scouts on nature hikes this morning.  They were earning their Webelos Naturalist merit badge.  I had one directive: teach them about decomposers, producers, and consumers.  I added a goal of my own — introduce the Four As: awareness, appreciation, attitude, action.   For 10-year-olds, I thought this might fly.  I suppose I secretly hoped to see some of that childlike enthusiasm, the wonder and joy that can be ignited by spending a half hour on the trail.  Well, there weren’t many ‘Eureka!’ moments.  I forgot that boys can get more interested in hitting things with sticks and calling each other names than looking at mushrooms and picking up litter.   ‘Awareness’ to them meant “look out for things that could hurt you” instead of “look out for everything because the world is awesome!”  I think I may have impressed some of them by leading them to a decomposing deer carcass.  That may have provoked a “Cool!” from a few.  I wish I could do a one-on-one hike, take more time to slow down and eliminate some of the group social pressures, but these kids come with a program, so I only get one shot with a group of 8 for 30 minutes.   I wish I had taken more time to do this with my own 4 kids. 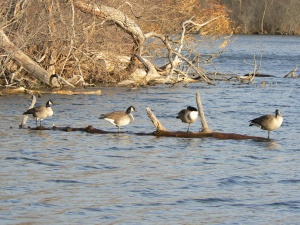 One thing to be aware of at Wehr

How do we bond with nature?  Will we ever fit in?  Are our brains just too big to allow us play nicely in the sandbox with the rest of the world?  Will we always be too distracted, too confused, too technological, too exploitative, too manipulative, too dominant, or too tasty?  I have to admit that to survive for 13 summers in Alaska among grizzlies is probably about the best record on that front.  Jane Goodall’s 45 years spent among chimpanzees is another monolithic example.   Will there be anyone like that in this next generation?  I can only hope…and volunteer to take as many as I can out on the trails.