My husband was diagnosed with diabetes after his first heart attack when he was 31 years old.  He died 16 years later from coronary artery disease, kidney failure, and other complications of diabetes.  He was sleeping in bed next to me and never woke up.  I unplugged his dialysis machine, his CPAP machine, and his insulin pump that morning and set him free.  That was 3 and a half years ago.  My eldest child got the idea the next year that she wanted to do something to honor her father and take action to support diabetes research.  She and 2 of her siblings participated in a fundraiser called StepOut Walk to Stop Diabetes.  I was really impressed by her initiative and her civic action.  I joined her the next year with Steve; the siblings had moved west by then.  This year, we are all going to participate together.  All 4 siblings and mom with a few significant others alongside.   Our goal is to raise some money, to honor Jim, and to be involved in positive action as a grieving family.   (If you want to donate money on behalf of our team, go to http://main.diabetes.org/goto/pgalasso) 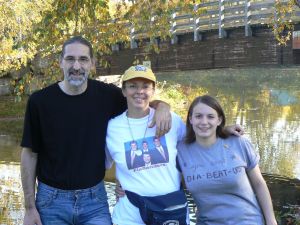 Do I expect that our participation will cause this disease to be eradicated?  Well, not really.  Do I imagine that Jim will feel honored and bring some good fortune to us from the spirit world?  Not exactly.  Do I hope that our sorrow will abate and our self-esteem will soar as we pat ourselves on the back for “giving back” to the community and “fighting” for a cause?  Actually, I don’t.  All of those things are ego-based and not very realistic.  What am I really doing, then?  Well, I think of it as “pointing the canoe” again.  I see that people suffer from this disease.  I see that certain kinds of medical technology and education have been used to ease that suffering.   I want to paddle my canoe, make some effort, toward helping those who suffer, not because I believe that I can rescue someone, but because it is how I want to live.  I want to honor Jim and remember him because that’s how I want to live.  I want to work with my family’s grief because that’s how I want to live.  I don’t know if any particular thing will result; I don’t expect to become noble or perfect or anything.  I do know that paddling in that way lets me choose a purpose and work toward it.  I suppose it helps my mind to be directed toward meaning.

So, why are we humans always looking for meaning?  Inquiring minds want to know…

That Steven Colbert report clip from the Approximate Chef suggests that we want to feel safe about the ending of the story.  We tell ourselves, “It’s okay, because it turns out this way; I know it does”.  That gives us, what, control?  Last night I had a dream about  meeting “the woman who owned the house” of the estate sale I went to yesterday.  I don’t even know that a woman lived there.  In fact, it was quite a masculine log cabin, with a boat and a mounted moose head dominating the decor.  What was my subconscious trying to figure out?  Well, I was trying to assure myself that this family was okay.  They were selling all their stuff.  They were letting strangers into their house to buy their belongings.  There has to be a story there.  I just went through the sale of my family home.  I had emotions about it.  I had a story.  I imagine that there are people behind these things with an emotional story, and I want to be told that they are okay.  I want to be satisfied that there is some meaning to the sale of these possessions.   Ultimately, I want to know that I’m okay, that my story has a happy ending.  (Steve always tells me that everyone in your dream is really you.)

Man’s Search for Meaning by Victor Frankl comes to mind.  I read parts of it.  Is this how we keep ourselves sane in “stressful” circumstances?  Is it just a game?  If it works, does it matter?  If I am not dogmatically asserting that my actions are ultimately meaningful, just saying that I find meaning in them and that is useful to me, does that make my position more authentic?  Can I make up a satisfying story about the family in the cabin and then say, “I know it’s not ‘true’, but I like to tell myself this story to calm my neuroses” and still be considered ‘sane’?  Do most of us do this anyway?  Does that make it ‘normal’ then?  I suppose I could give that up and face the fact that I won’t know every story.  Perhaps I would be far more sane to learn to live with ambiguity and uncertainty and meaninglessness.   What do you think?